The rise of Twitter may not have been welcome for some. I personally loathed the idea; couldn’t see the point of Facebook status-ing over and over. What was it even for?

Of course, that all changed. I use Twitter every single day of my life, to ‘connect’ (ugh) with people, and to keep up with news and industry gossip. I’ve talked to Caitlin Moran on Twitter, I’ve blagged free stuff – I’ve even learned my trade from the connections I’ve rinsed.

But at a very base level, Twitter is a fabulous experiment for a linguist. All the world’s quirks are laid out for examination, like rabbits in a butcher’s window. I really don’t use hashtags a lot; #amwriting to connect with other writers and an array of ironic statements, mainly. Because that is the beauty of the hashtag: it’s a new vein of semantic joy that just didn’t exist five years ago.

I have no idea how Friday Follow started but it’s lovely. That someone delighted you enough this week that you think your Twitter followers should go take a look at them. I don’t use this hashtag, but I love what Rachel Rabbit White does with it. Instead of #ff-ing people, she #ffs things like:

#ff the casual sexual partners taken in travel, and the emotional bond this creates to the new city (rather than person.) — rrw (@rabbitwhite) April 25, 2014

#ff the sleeping self who is always in the rooms of houses she grew up in, even in restaurants — rrw (@rabbitwhite) April 18, 2014

This is really my only concession to hashtag fashions. The ‘unique’ hashtag, that lets people know you don’t conform to social trends – despite doing just that.

The purpose of hashtags, of course, is to connect people through shared experiences. So by using a ridiculously long hashtag that no one else is, you’re above it, beyond it. Subverting this social communication tool announces “I don’t even WANT to connect with you because what on earth could we possibly have in common?”. And negates the sentiment entirely by tweeting it publicly.

So many hashtags are overused by the people that shouldn’t really be on Twitter. The people who think it’s just another kind of Facebook. Often the very best source of snark fun on a Friday afternoon is to go look at the #swag or #yolo* streams. This is where the idiots are and you can laugh at them for free.

I ate 20 pieces of chicken nugget and when I was bout to take a shower I vomit #yolo#swag — TYSM TEALA♛ (@CarterMyPuma) May 9, 2014

Because of this kind of fool, a new irony has arisen on Twitter, and has even spread to my own Facebook recently. It’s funniest on Facebook because the use of hashtags on The Book is widely derided.

My favourites are #blessed, #yolo, #sorrynotsorry and #humblebrag. #blessed makes me very nearly sick every time I see some awful mommy blogger Instagramming her porridge, but it’s HILARIOUS when put in a comment to someone who said they had a nice day out on Facebook. I can’t really even explain the LOLs to you. It’s just so funny.

Interestingly, Rachel Rabbit White doesn’t use hashtags on Instagram at all. Sometimes not even captions. A silent statement. 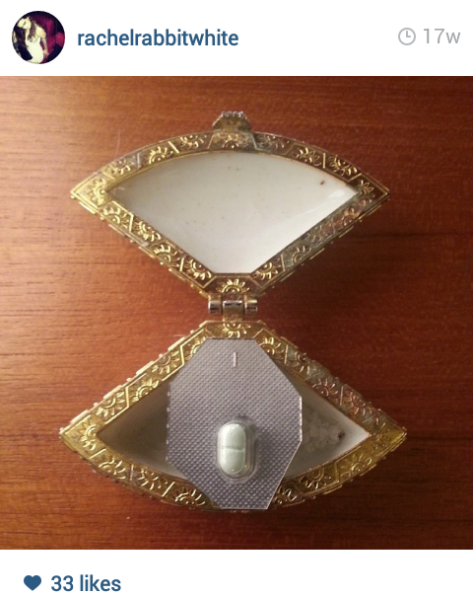 Something that is VERY interesting is the use of punctuation in tweets. Yes, you’re restricted to 140 characters so you may miss out some to make your thought fit (but seriously, only actual morons use ‘text speak’ on Twitter), but this restriction actually makes me think more about the potential inferences. It’s very bare, that little text.

So, here’s a pattern I’ve seen in my own tweets: when I’m saying something that I want to be a really stark (single) sentence with a tone of dry irony, I subconsciously don’t end with a full stop. I think this feels like what I’m saying is so ‘can you even fucking believe my life?’ that I’m just beyond punctuation. I also use it when something is so beautiful that it should be free from the constraints of grammar. That’s hard to explain.

Sometimes I hate myself for giving these people pageviews — Honor Clement-Hayes (@mutatedmusings) February 18, 2014

I write these things down because I’m thinking them and the words fill up my head. 🙂

* Mama, YOLO means ‘You only live once’ and any prick who’s been to Thailand or eaten a McDonald’s uses it to suggest they are a free spirit and couldn’t care less about what The Man thinks.