So I have a bit of a shoe problem. It’s not so much a PROBLEM as a foible, which poor Sig. Oth. has to attempt to put up with. To say I have many pairs is an understatement. Every girl thinks she has a large shoe collection. But she never met mine.

My main suck, my sartorial crack, is eBay. Oh, eBay. How I love to roam your glorious virtual aisles. I would hate to guess how much I’ve spent on eBay over the years but it’s definitely sick.

This is quite a negative introduction to what I wanted to tell you about but I think I needed to get some guilt off my chest. Mea culpa.

So: shoes. Yes. And glitter.

A very, very long time ago (so like two years), I started seeing blogs about DIY glitter shoes. See; right there. Love DIY, love glitter, love shoes. But I never did it, because I was labouring under the GRIEVOUS impression that Mod Podge (by all accounts, a vital tool) could not be found for love nor money in the UK.

HA. I should have known. eBay LOLs in the face of any such problems with sourcing bizarre necessities. See also: insane quantities of holographic glitter in all the colours known to man. I bought 40 grams.

My main aim for this is silver glitter Mary Janes. I had been lusting after some by Red or Dead for about a year and did actually promise them to myself if I got a new job (which I did) but as happened with my when-you-get-your-first-big-girl-pay-cheque-you-can-have-a-Mulberry-handbag pact, I was suddenly and soberly sensible when it came to the crunch. Ish.

Beautiful, yes. But not only were they pretty uncomfortable; they were also sold out in most stores and going for upwards of £50 on eBay even months after.

I resolved to do it myself. How hard could it be to chuck a load of sparkles at some shoes? No problem. So, I found some TRULY VILE coloured (prosthetic limb beige) wedge Mary Janes on eBay, then Mod Podge, then the bucket-loads of glitter. Tonight, the experiment commences.

I’ve read several different blog posts about this DIY but as they all seem to turn out pretty well I’m just trying half glitter and half Mod Podge (Tavi Gevinson recommended this and I think that kid is a God). 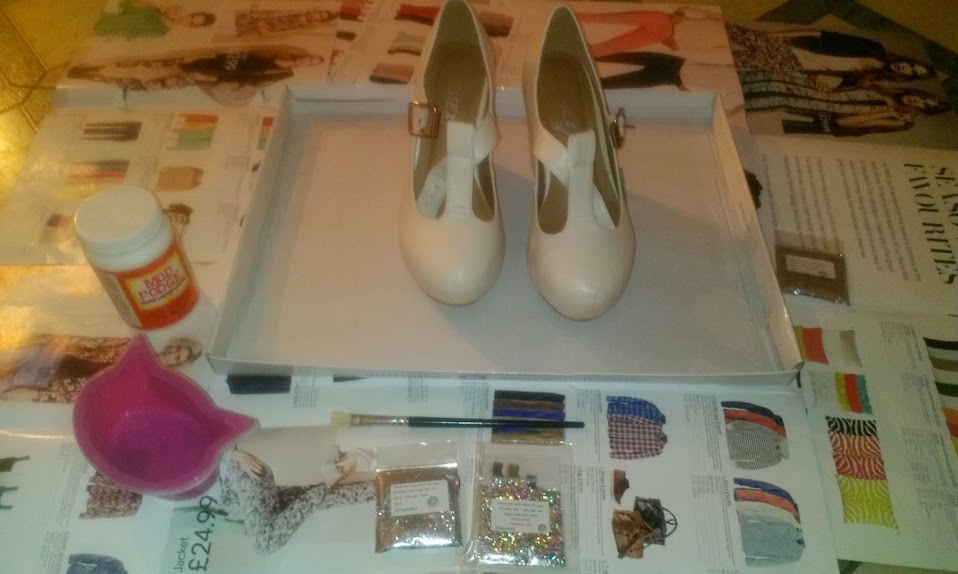 I bought nail glitter which is ultra fine so I already know it’s going to be way flatter than I want even with slightly chunkier holographic glitter mixed in, but we live and learn. I intend to add a layer of the holographic glitter for depth and texture later.

Yeeees. Hmmm. Bit sparse on the old glitter front. Still very much at the prosthetic foot stage. However, can see already that this would be ace for just adding a sparkly sheen to a pair of shoes which are already a nice colour. And if one could, why would one NOT be sparkly?

BUT, I can see for definite that my glitter is not chunky enough. I want TEXTURE like the Red or Dead Mary Janes so I can see a little trip to the craft shop occurring tomorrow. NB. glitter is difficult on the internet.

Better, much better – despite finding no suitably coarse glitter at Hobbycraft. The first coat took maybe an hour to dry, though possibly it should have had longer (I am notoriously poor at waiting for things to dry as my former textiles teacher could tell you). The glitter is much more solid now, though I’d guess it needs at least two more coats plus my extra glittery top coat.

It may just be my fussiness about things being perfect (blame my parents) but I’m doing a whole bunch of layers here. Think I’m on layer five.

They look AWESOME but for my last layer I intend to glue then sprinkle so that there is more of a texture, then spray with spray fixative / varnish. You can even get GLITTER spray varnish… Last of all, I’m going to paint the edge of the soles with sparkly black nail varnish so it’s not awful tan but not thick glitter either. Hoping that the finish may help to make them look a little less homemade.

They wear just fine – the last coat of acrylic varnish really fixed the glitter and also got rid of the slightly tacky finish. The black nail varnish edge was a great idea but it comes off almost immediately so I think I’ll let nature do its stuff there. I’d use permanent marker fixed with acrylic varnish in future.

I’ve learned a valuable lesson: spray your shoes the colour of your glitter, or at least close to. I got SO friggin’ sick of thinking ‘Yep, last coat’ then still finding little patches of beige. I have red spray paint already so my Dorothy shoes probably won’t take as many coats of glitter.

I’m also going to just use the fine nail glitter for a base cover, then cover in Mod Podge and actually pat on big (2mm) hexagonal glitter to get the rough texture, paint on Mod Podge again and seal with acrylic spray.

But not for a few days yet. I need to recover.